Review: She Said by Megan Twohey and and Jodi Kantor

So, this book, along with Catch and Kill by Ronan Farrow are really credited with starting the avalanche that is the #MeToo Movement.  She Said chronicles how Jodi Kantor and Megan Twohey broke the Weinstein story for the NY Times.  I literally devoured this book in large chunks because it's very readable and ego free and lends itself to binge reading. The book itself is timely since Harvey Weinstein is in the middle of his criminal trial in NYC on sexual assault and abuse allegations.

There were many things that I learned in reading this that I didn't know before - how it was Rose McGowan's infamous tweet that caught their eye and began the process and how Lisa Bloom (who is the daughter of Gloria Allred) pretty much worked for Weinstein, helping him to discredit the women that she build her career and reputation helping. I also learned, although I wasn't surprised, that the two reporters struggled for at least a year to get people to go on the record - while they learned of many women that had been abused at Weinstein's hands, all of them were either scared or had received settlements (or both), putting the two persistent reporters in a bind.

The persistence of the reporters was inspirational as were the stories of the ordinary women who eventually came forward.  The last part of the book focused on the Kavanaugh hearings - those hearings were ones that I was obsessed with because of what I do in real life for work and my interest in gender issues - they seemed to intersect in those hearings.  I wish that this section of the book were as fleshed out and detailed as the Weinstein parts, but it was still really wonderful to read.   I enjoyed this book and what it reveals about the power struggles, the ambiguity of sexual harassment reporting (by actual reporters and the people that suffer it at the hands of powerful people) and where we are at as a society currently.

Definitely worth the read.
at February 15, 2020 No comments:

The Sunday Post is hosted by The Caffeinated Reviewer every Sunday.

This week found me busy at my job and also doing child care stuff.  My daughter came home sick on Monday (thanks to Sara for helping out) and then on Tuesday, we were busy at home doing homework and after school stuff.  I've not been sleeping very well and sometimes just want some time where people aren't constantly asking for attention - whether it be asking to hang out or constantly texting or something to that effect.  Don 't get me wrong, I don't mind the checking in but sometimes I feel like it's constant and my boundaries aren't always respected, which makes it difficult.

Yesterday, the kids and I had fun - we went to the Children's Museum in Boston. They seemed to like it even though there were parts that were pretty busy and crowded. Our local library got us discount tix so it was well worth it.  We took public transportation in and then walked the five minutes from the T stop to the museum.  I am going to look into doing something similar the next time that I have the kids - we've already done the Aquarium and Museum of Science.

This past week, I only really reviewed two books: Prozac Nation by Elizabeth Wurtzel and The Furies of Calederon, but this week will likely see a review of Rich People Problems by Kevin Kwan and She Said by Jodi Kantor and Megan Twohey.  I'm also very excited that Netflix has the fourth season of Better Call Saul, which I'm eagerly watching. Bob Odenkirk is great in it.

I had never heard of Jim Butcher before I received the suggestion to read this book and the subsequent series. I was looking to start another series of books and one of my Facebook group members suggested this.  He also has a series of books called The Dresden Files
that I'm seriously considering reading at some point.

The People of the Valley of Calderon, and the world of Alera in general, have naturally ingrained talents referred to as furycrafting. As a result of this talent, the people have been able to train the furies to assist them in their lives. Alera is governed by the First Lord Gaius, who is getting older and doesn't have an heir to assume his position once he passes. War is brewing as a result of the anticipated void that will be left by his death. Fairly early on, we meet Tavi - a boy that is considered to be disabled because he can't summon or control any furies. Tavi lives in the Valley on Bernardholt, with his aunt and uncle - the owners of this land. Tavi and his uncle discover that the Valey is under attack by a horde like group of people called the Marat and their human, mercenary allies that seek to assume power before Gaius' death. The resulting adventures and  battles happen quickly and intensely.

Butcher's 600 plus page introductory novel jumps right in to the action and I greatly appreciated that.  While I understand that most authors like to take the time to set the stage, the often 100 pages that it takes can be somewhat dry. There's always something going on, such that it might be helpful for the reader to keep notes. The characters are easy to identify with in spite of their magical talents and the sorts of things that they are trying to accomplish.  I appreciated that Butcher took time to have us focus on the characters and their struggles as much as the plot that he was trying to forward.  Characters learned things about themselves and/or the world around them.

I read Prozac Nation for the first time when I was in High School. I don't remember why - maybe because the cover intrigued me by showing a girl that was like me or someone I wanted to be. Anyways, I remember devouring it then and I wanted to read it again because Elizabeth Wurtzel recently passed away.

Much like The  Bell Jar by Sylvia Plath (also a book I adore!), Prozac Nation graphically details Wutrzel's struggles with depression in the eighties and early 90's - the book was published in 1994. She attended Harvard, where many of her battles took fruition. Initially, I don't think that the book got the attention it deserved.  This is a rich memoir of how Wurtzel pulled herself up by her bootstraps, won numerous awards, got into Harvard and yet, was plagued by a deep seated depression that traces back to her youth.

This book changed the world of writing in many ways, but most notably, it was unashamed and unabashed and allowed people to really talk about things like mental health without shame.  Wurtzel was one of the first to use Prozac to treat depression successfully and she told us her stories without shame.  I loved it.  And I loved reading about her.

This book is just as good as it was when it was released over twenty years ago and is just as important and relevant now as it was then.
at January 28, 2020 No comments: 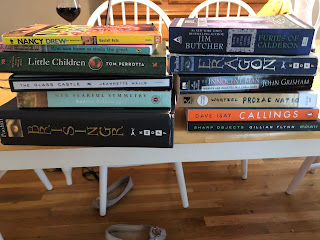 I absolutely love my local library. I'm pretty sure that they love me too because I'm there so often taking books out that they know my name!  Anyways, today, they had their semi-annual book sale, and I brought the kids to it. As you can see, we brought home a bunch of things - this haul cost me a whopping five dollars.  My son is excited to start the Eragon series (I already have the second book and now have the complete set) and Gabby got a Nancy Drew book and a Judy Blume book - neither of which you could go wrong with!

I'm excited to get cracking on these. Just so you know, there's a resource to find local booksales in your neighborhood.  If you go to this site, you can select your state and will be able to find one in your area!  :)  Happy book hunting!

For such a short novel, this book packed a huge punch.  Schwartz tells the story of the defection of Svetlana Alliluyeva Stalin's only daughter to the United States in the form of diary entries written by her. At 41, she abruptly defects to the United States, leaving her two oldest children in the USSR, hoping that they will be able to forge an identity separately from her and their notorious grandfather. Alliluyeva spends some time in Princeton, NJ giving lectures and writing and then moves to Frank Lloyd Wright's Taliesin West in Arizona and has another child.

Svetlana has written her own books: Twenty Letters to a Friend, Only One Year and another that wasn't very widely published.  Obviously, this is a fictionalized account of Svetlana's life and her experiences but I found myself drawn to her story and her experiences so much that I plan on reading Twenty Letters to a Friend. Interestingly, Schwartz had access to the file of the lawyer that went to Europe to escort Svetlana back because that lawyer was his father!

This book was fascinating because of the themes that it explored. Svetlana never really had a life or identity of her own - either in the USSR or in the United States.  Stalin controlled her every move, including who she could marry and when and where she had to ve and then, in the United States, she had CIA minders with her all the time. Ultimately, Svetlana herself and by extension her children were used as pawns in the Cold War. Burnham does a great job in exploring this theme.  She was constantly seeking connection to people in order to fill the void that had been left within her by her leaving her two eldest children - this included imprinting on her lawyer (there was never a real romantic relationship but the possibility was definitely there) and marrying an architect at Taliesin West, in addition to having another child.  There was also significant and prolonged guilt about having to leave her two eldest children behind and her desire to have a relationship with them.

This book was impressive and a pleasure to read.
at January 26, 2020 No comments: 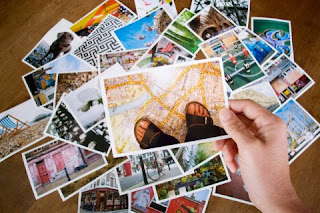 This is a Japanese novel in translation by Yogo Odawa and which I heard about in one of the blogs that I read. It takes place on a small island, where we learn that random things are disappearing.  These things are everything from perfume and roses to boats and novels and even people. The goal is that the remaining people will slowly forget the items and people that are gone. And yet, it's not like 1984 or The Handmaid's Tale.  It's very, slow.

The protagonist is a young woman who is a novelist and she floats along, not caring if things are happening and not making things happen. She is hardly an agent of ANYTHING, whether it is for change or advocating for the state. It's like she doesn't care about anything. Nothing happens - she doesn't learn anything and the plot doesn't move. I kept waiting for something but nothing happened and I was left unsatisfied and disappointed.

Review: She Said by Megan Twohey and and Jodi Kantor

So, this book, along with Catch and Kill by Ronan Farrow are really credited with starting the avalanche that is the #MeToo Movement.  Sh...